I hate that I am expending time and energy on the latest (and hopefully last) controversy generated by a person who gets way more attention than a garden-variety bully with an acute case of potty-mouth like him deserves.

And yet it sickens me to see not only the usual apologists for predatory male sexuality, but people who should know better, defending this shitsack.

So yeah yeah, the right was totally fine with his ongoing, virulent misogyny, racism, and other sickening trolling for attention. Honestly, is it news to anyone on the left that conservatives are overwhelmingly misogynist and racist? If it is, y’all have seriously not been paying attention. But now that they have dumped his sorry ass, you’re mad at them for taking issue with support for pedophilia? It’s a low bar, sure, but honestly I was relieved to see they had one.

Dickwad claims he was misquoted, his words were taken out of context, even that he was guilty of “sloppy phrasing.” But watch this interview (if you can stand to). He’s unambiguously arguing that gay and straight sex between adults and young teens is fine. Maybe that’s because he is an abuse survivor, maybe that’s not what he really thinks, maybe he reconsidered later watching his career go down in flames, but the fact remains that those words, in a public broadcast widely available on the internet, provide support for pedophiles and pedophile apologists, of which there are plenty on both the right and the left. Male sexual predation on girls and teen women is a huge problem. I personally know many women whose psychological, social, and sexual lives have been severely damaged if not ruined by males who felt entitled to abuse them sexually as girls or teens. One quantifiable aspect of this problem is the fact that sixty percent of the fathers of children born to females aged 15-17 were three or more years older.

And I hate to tell you, but gay people doing it doesn’t make it OK. I had an intense emotional entanglement with a high school teacher at age 17, and believe me, I was in no way psychologically prepared for a sexual relationship with someone in her 30s.

Despite how people love to focus on the motivations of the victim where sex is concerned (“those shameless unwed mothers!” “women have a right to sell their bodies!” “children have sexual feelings and who are we to deny them that!” “the bottom controls the scene!”) pedophilia and sexual abuse are about power, not about the desires or actions of children or teens. In a culture that fetishizes youth and still struggles with a legacy of puritanism about sex, it’s true there’s little healthy discussion of adults’ inappropriate desires towards teens. But rational adults know that you don’t take advantage of young people’s desires for your own gratification. Young people need and deserve time to explore sexuality on their own or with peers, if they want to, before they can honestly choose a relationship with someone several years older than them. If you’re a 29-year-old who believes a 15-year-old is a viable sexual partner for you, you are a predator, full stop. And anyone, gay or straight, who says differently deserves to lose their public platform, even if the ones who take it away only do so because they think gay sex is icky.

Image (along with many others equally nauseating) at GenderTrender.

…but only because you can’t always tell by looking. A few minutes of chitchat should be plenty though.

And just in general, no one should date anyone they don’t want to date.

I don’t know why anyone thinks feminists would be okay with any pressure to the contrary.

From Term Abdominal Pregnancy with Healthy Newborn: A Case Report:

Doing math… so the scenario tweeted above occurs in roughly 0.0001% of all pregnancies. Oh look, the nice authors did some math too.

When an abdominal pregnancy is diagnosed in someone female, immediate surgery to remove the fetus is normally recommended.

Of course I can’t be sure of the tweeter’s intent, but may I state for the record that in the reality-based community, male people will not become randomly pregnant via a fertilized egg implanting on their intestines. A fertilized egg cannot spontaneously occur where there is no ovary to produce it, and no way for viable sperm to reach it (AKA “a vagina”).

Were a uterus-free person somehow able to find someone reprehensible enough willing to inject a fertilized egg into their abdominal cavity, and were that fertilized egg to implant onto the peritoneum (despite the vanishingly small chance of this happening spontaneously, as cited above), that uterus-less person would be at risk for the same very serious and potentially life-threatening conditions as a uterus-plus person with a (much more statistically likely but still statistically rare) ectopic pregnancy: Extreme abdominal pain, bleeding, infection, and organ rupture.

the diagnosis is made on the basis of the ensuing complications such as hemorrhage and abdominal pain. Maternal mortality and morbidity are also very high especially if the condition is not diagnosed and managed appropriately. These pregnancies generally do not get to 37 weeks (term gestation) and usually the end result is the extraction of a dead fetus. Another challenge for babies from abdominal pregnancy is the very high incidence of congenital malformations. Abdominal pregnancy at term with a healthy viable fetus is therefore an extremely rare condition…

Facts are your friends, people. Please do your research and don’t believe everything you read on Twitter. 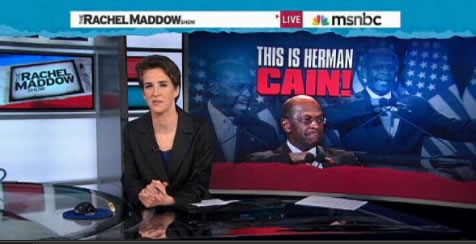 Rachel Maddow has an ongoing critique of the Herman Cain performance art project campaign on her MSNBC show. Some of the fancy-footwork highlights and general Cain nutty goodness from the Nov. 8 broadcast:

CAIN: I cannot say that it is a conspiracy. We do not have definitive, factual proof. We can only look at some coincidences to suggest that maybe someone is deliberately behind this. So, we have not been able to make any determination to point any fingers or place any blame on anybody at this point. When we step back and look at the fact that there’s no facts, no factual evidence to back these up, we can only infer that someone is trying to basically wreck my character…

Yep, the fact that there’s no facts can only lead to the conclusion that someone is trying to “wreck” your “character.” We couldn’t conclude, of course, that the women you sexually harassed are actually telling the truth. And as far as wrecking your character goes, dude, I think you demonstrated the content of it pretty clearly, when you tried to coerce and force women to have sex with you.

Oh, and on the very important difference between “settlement” and “agreement”:

CAIN: I’ve been criticized by some members of the media that I have changed my story. When the firestorm started a week ago Monday, I was presented with the accusation of some settlement was made. Settlement to me means there were legal implications. Later during that same day, I then recalled after all those years that there was an agreement. That’s what businesses sign with employees who are departing the company. They call it an agreement. Settlement implies legal implications. All of the potential legal implications or ramifications or accusations were found to be baseless.

I have much more confidence in Cain after that, because all my jobs pay me a year’s severance ($35,000) for no reason other than that I’m “departing the company.” Don’t yours?

The most important part of this show, though, was a brilliant conversation between Rachel and Melissa Harris-Perry of Tulane University — an incredibly rare event in mainstream media, a discussion BETWEEN WOMEN of the way women are portrayed in the media and how that affects politics and real life, and how we can talk to each other about it. Watch the clip (Harris-Perry interview starts at about 5:50).

That might seem like feminism 101 to us, but to hear the truth about the matrix spoken from inside the matrix — I still kinda can’t believe it.

Transcript of that interview after the fold for those who can’t access the video. END_OF_DOCUMENT_TOKEN_TO_BE_REPLACED

Raquel Nelson was convicted of homicide by vehicle and reckless conduct by a jury and faces sentencing tomorrow. She can receive up to a three-year jail sentence, six times the stretch that Jerry Guy–who admitted to drinking before running over Nelson’s son, A.J.–served.

Are you paying attention, ladies? No matter what happens to your kid, YOU are responsible. Some jagoff knocks back a few, jumps behind the wheel, and kills your sweet baby? It’s YOUR fault, you committed homicide by vehicle even though you weren’t driving.

Seems the mofos in charge are doing their best to encourage us to think long and hard about whether we’re willing to bear and raise the next generation in such a woman-hating climate.

Update 7/26/2011: Ms. Nelson did *not* get jail time, *just* probation and a new trial. For crossing the street and losing her child. I suppose I should be thankful, but geez. Something stinks in our justice system, for sure, and it stinks like patriarchy.

“Women get bored easily”??? Yeah, I’m so sure that’s the problem. It has nothing to do with men acting dull as posts.
Click here to watch the stupid commercial.

O how I frigging hate this season, when the belief that all women are whores who will give it up for something shiny is proudly repeated several times per hour in an evening of prime time TV. I couldn’t find a video of the ad that drove me over the edge the other night — I think it’s for Kay Jewelers, shows a man and a woman sitting in a cabin during a rainstorm. The woman gets frightened (!) by the thunder, and the man puts his big strong arms around her and says (more or less), “Don’t worry your pretty little head about it, honey, I’ll always be here to protect you.”

And then he gives her a necklace. And then she sucks his face.

You don’t even have to be a feminist to think it’s crap, apparently.

So, anyway, this very funny parody soothes my indignation by pointing out exactly how stupid jewelry manufacturers think women are.

Why do we put up with this crap again? 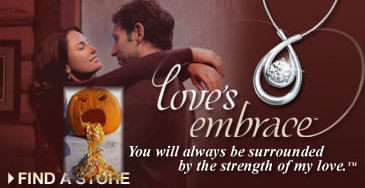 Update, 11/25/2009: The vomitrocious ad has made it to YouTube. Be sure to have a bucket in front of you before you play it.